On July 21, 2022, an online discussion of the UBA Committee on Tax and Customs Law took place. The discussion was dedicated to problematic issues of VAT and registration of tax invoices under martial law. 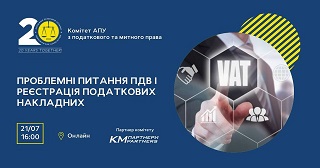 Yuliia Kryvomaz, Senior Of Counsel of

, delivered a report on this topic at the meeting. Yuliia spoke of the current state of the VAT collection system, the reasons for the problem aggravation, and what taxpayers should do to preserve “live” funds. The main theses of the speech are the following.

As one knows, upon the beginning of active combat operations, the VAT collection system stopped functioning normally, because a wide list of transactions was excluded from VAT taxation, and some taxpayers switched to paying a single tax at the rate of 2% without paying VAT. Registration of tax invoices “was actually blocked without any regulatory justification. This led to an even greater failure of the VAT system”. The legislator, trying to correct the situation, allowed VAT amounts to be attributed to the tax credit on the basis of primary documents during martial law.

After almost three months in a blocked state, the system is slowly resuming its functioning, registration of tax invoices has started again. But does this mean a return to a normal (or rather at least familiar and understandable for taxpayers) previous state?

As Yuliia notes, “in fact, there are more questions than answers. The legislator has confused everyone even more and it is difficult to predict how the tax authorities will behave”.

However, according to Yuliia, taxpayers who have already adjusted data on the tax credit in their tax returns for June, reducing the credit by the amount of VAT for transactions not confirmed by registered tax invoices, can take action now. “It is necessary to assess whether the company can pay its obligations now, or whether it is better to keep these funds in circulation for the issuance of tax invoices later.

If the tax credit for transactions, which are not confirmed by the tax invoices registered in the Unified Register of Tax Invoices, has already been reduced in the tax return for June, there are grounds to say that it may be reinstated”.

’s experts “Law No. 2260: how and why did the business become a “scapegoat” for problems with the system of electronic VAT administration and registration of tax invoices?”.

Yuliia’s presentation is available in Ukrainian by the link.